Having spent 37 years as a merchant seafarer, the sea plays a large role in Graham's work, however wildlife and the outdoors also greatly influence his art.  He uses all media and this exhibition includes oil, acrylic and watercolour.  20% of all sales will go to The Mission to Seafarers Falmouth.

As you will see from Graham’s bio, the sea has played a great role in his life and he is comfortable painting the sea and clouds, especially stormy scenes which he encountered a lot during his life at sea.  Since moving to Cornwall, Graham has gained inspiration from the landscape.  This year he has  introduced gold, silver and bronze leaf into his work, and this will be seen in three of his exhibited works.

Graham Hall, originally from Harrogate, North Yorkshire, started painting at the age of 8 and was selling pictures to his schoolmates by the time he was 12.

When he left school he enrolled into the Gravesend Sea School to train for a career in the Merchant Navy.

Graham's career at sea has spanned over 37 years and he has sailed with many of the great passenger lines including Cunard and Union Castle.

He started his career on salvage tugs - his real love, and was onboard the Salvonia (Overseas Towage & Salvage) when she towed a jack-up rig from Alaska to Singapore, which at the time was a world record tow of 92 days.

He then moved to passenger cruise ships, and it was whilst working on the Cunard's QE2 that Graham's artistic flair was fully recognised.  Graham was a specialist cook in charge of buffet work and ice sculptures, and on one particular cruise to Comeby Chance Bay was awarded a silver medallion for his buffet work by Jackie Onassis.

After five years on cruise ships Graham went back to the adrenalin-charged work on salvage tugs with United Towing and Salvage and was involved in the Cod War when the tug Euroman was sent to Iceland to keep watch over the UK fishing fleet, along with the British Navy.

He has also spent time in the North Sea oil business with Offshore Marine, Zapata, Tidewater and finally with Gulf Offshore and the MCA coastguard tug operator Klyne Tugs.

Please think social distance, and sanitise your hands on arrival. 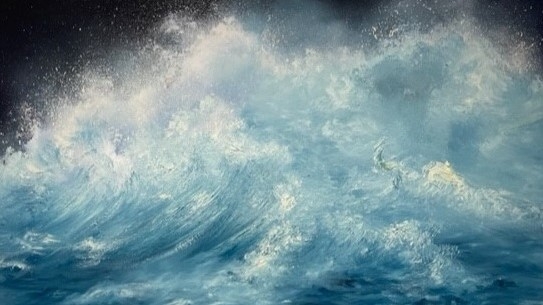 Join author and illustrator Emma Yarlett as she reads from her books and hosts an interactive workshop for little ones. ...

Join Nina on a hilarious journey through her symptoms, ways of coping and discussions of all things ‘lady parts’....